You are here:Home Articles Why we need to stop shaming Adele 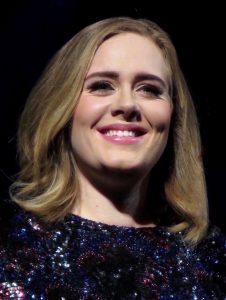 weeks now, the majority of people who have seen Adele’s announcement about her current vocal problems have jumped on the bandwagon, shaming her for having what is essentially the same as a sports injury.

“She just needs better technique and she won’t have problems!”

We’ve heard and seen this phrase a lot, from non-singers, professional singers and teachers alike. And in reality, whilst good technique will help prevent problems, it is not the holy grail to preventing vocal problems.

In reality, being a singer is much like being a sports player. We have to do exercises with our voices, warm them up and down and sing songs – much like a football player would warm up his body, work on his free kicks, dribbling and passing, before he’s allowed to use those skills in a game. Then afterwards, a cool down, stretch out and rest. Just because a singer is using a smaller set of muscles, doesn’t mean that it doesn’t take as much effort. We are just as prone to injury as a sports person.

Take for example, a football player. If a player is in a match, kicks the ball badly and ends up with a calf injury – would you hound him telling him that he “just needs better technique and that won’t happen!”? Probably not. Because you know he’s played well all season up to now, and that one kick has caused him an injury. Would one small thing like that make you say he has terrible technique? Probably not.

Now, what happens when a footballer, or other sports player has an injury? They take time out to rest, recover and re-train before they’re back in the game again, without too much bad press. So, why do we treat singers differently?

So why do we think we can understand Adele’s problems so easily?

Answer, we can’t. We can’t possibly begin to understand Adele’s problems with her voice. On the surface, we know that she has a vocal haemorrhage that caused her to cancel her last two Wembley gigs, and we have a good idea that vocal overuse has caused the problem.

But unless we are in or have been in her shoes, we cannot begin to process what she has gone through in the past year. Scheduling 122 gigs and performing 120 of them in 18 months – one every three days – performing to thousands of people each time. Thousands of people who know the songs, know the words, know every note you are going to sing, and who can also sing your own songs back to you. Amazing, right? Yes, but that can also be very stressful! These people expect a flawless performance, no messing up lyrics or timings or wrong notes, they’re likely filming her on their smartphones and expecting her to be exactly like her album in her delivery.

But, in reality, we have to remember Adele is a human being. One who has to balance being a Mother and a performing singer who is away from home, and also gives back to her fans more than she probably should, staying for autographs and selfies and everything else long after she should have left the performance venue. That impacts on her eating times, sleeping times and rest times. Not to mention precious mother/daughter time!

Adele is a person – she has all the stress of everyday life combined with a high octane job. Singers will know that even though we try to eat perfectly, at regular times, stay completely hydrated, get just enough sleep – no more and no less than our bodies need – keep our stress levels low, hormones in whack, and our mental health on the right track, we can fall down in many ways. Not having all of these things at their peak can affect our performance, because we use a biological instrument.

Singing is not like playing the piano – an instrument that has to be tuned every so often and is stationary, just waiting for us to play it. Singing uses an instrument which is very susceptible to all of the above factors. If one day we are more tired than usual, our vocal performance is affected because our whole body is lethargic. Same as if we indulge one night in a glass of wine, the next morning we may have to deal with the effects of acid reflux when all we wanted the night before was to be sociable and have a glass of wine with our partner.

Even if all of those things are perfect – which they are never going to be all at once – we also have to live. There is absolutely zero point in denying yourself the flavours of life in favour of having a perfect voice every single day. Adele has just been trying to be a person, a singer, and a famous singer at that, for a whole year. And something had to give. Unfortunately, it happened to be her voice that gave out on her.

But what about her technique? It was bad!

Maybe it was bad, or less than good. But, have you seen her warming up her voice? Do you know what precautions she takes to let her voice rest and recover after each performance? No, neither do I.

Just because it was her voice that gave out this time, we presume that her technique was bad. But remember, having absolutely perfect technique would not have produced those emotional lyrics, that when we heard them make us yearn inside and allowed us to connect with her songs. Perfect technique is reserved for training the voice, not for singing songs.

Bending the technique to fulfill the emotional power of the pop song is far preferable to our ears than a song full of perfect diction and phrasing. In fact, if Adele had been perfect vocally like this, she likely would not have the fans she has today.

If she had fallen off her stool in the middle of the concert and broken her arm, would you say her sitting technique was bad? No, you’d take it as an accident, just bad luck that it happened. So why are we still shaming her for an injury?

In my professional capacity as a voice teacher, I can hear things underneath her singing that I would want to help her with technique-wise. At YVS we are big advocates of training the voice with good technique and then manipulating it in a safe way to put across what you want the audience to feel.

Good technique is the foundation on which you build your instrument. It is how you build it, stretch it, help it to grow in a safe way. On top of that, you add performance technique – emotion, style, phrasing, ornamentation like riffs and runs. It seems to me like Adele skipped some of the basics of good technique, preferring to let her voice run more on performance technique, which does not particularly help to prevent vocal issues. But it doesn’t always lead to them, either!

So even though I don’t feel like Adele was performing with good technique, I also do not want to shame her for it. Every singer that’s up there right now has varying amounts of good technique underneath their singing, and even I accept that having flawless technique is not the holy grail most people think it is.

I honestly applaud Adele for having the guts to cancel her last two Wembley shows. All of that, on top of dealing with a vocal injury that might decide where the rest of her career goes, or not as the case may be. I cannot begin to imagine what she is going through right now, mentally, physically and emotionally. I just hope she is getting the support she needs from the people who will help her get back on track.

At YVS, we are here to support and teach those people that come through our studio doors that have had or are currently having vocal issues. They are no different to Adele, just because they are not performing to huge crowds every three days doesn’t mean they aren’t slamming their voices too. A professional voice user is defined loosely as “someone who uses their voice for their job” – so that emcompasses singers, teachers, actors, secretaries and call centre staff to name a few. Not just famous singers on tour!

So why are there so many people shaming her for having a vocal injury that is essentially a culmination of a gruelling schedule, not-great technique and vocal overuse at the end of a very long 18 months of touring? Until we have been in her shoes, we cannot begin to understand what she has gone through to get to this point.

Vocal injury is not well understood; the cause and effect of many things can culminate in voice problems and we should all remember that unless we have direct experience with what we are talking about, compassion is key.

As I said above, Adele will need all the support she can get during and after this injury, and the shaming that’s going on will not help. So, next time you think you know what’s happening, have a chat with a singing teacher, an Ear, Nose and Throat doctor or a Speech and Language Therapist. They’ll tell you what I’ve just said, and maybe we’ll all learn a little as well.